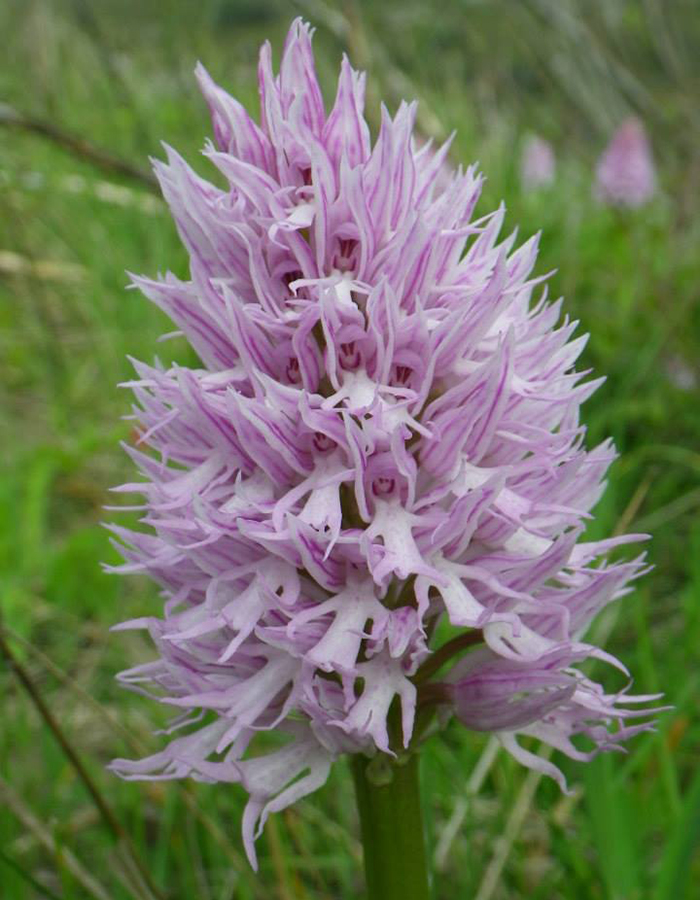 Habitats: Shrubs, sparse forests.
The so-called “Italian orchid” grows in the lush shaded areas of some of our mountains, such as Els Cavalss de Pego or La Vall de Gallinera, where there are numerous and enchanting groups of the orchid. It has tall, softened floral spikes that stand out against the dark and dense brush like lanterns with a very soft pink light. […] It is possible to admire it and smell it carefully, and in all its splendour, from before the start of spring and throughout all of April, along the high and lush edges of the natural springs known as La Font de la Mata and La Font de Benimarsoc, near Benirrama, or next to the convent and the spring of the place known as Hort de Benitaia. It is considered a rarity.
Joan Pellicer, Herbari breu de la Safor.

Characteristics: An orchid which is easy to differentiate due to its large size and the basal leaves with markedly wavy edges. The flowers are grouped together to form a conical, dense, light lilac inflorescence. The labellum is highly lobed, the lateral ones are sharp and the central one is triangular, deeply divided into two secondary lobes separated by a tooth.

Go to endemic or threatened plants