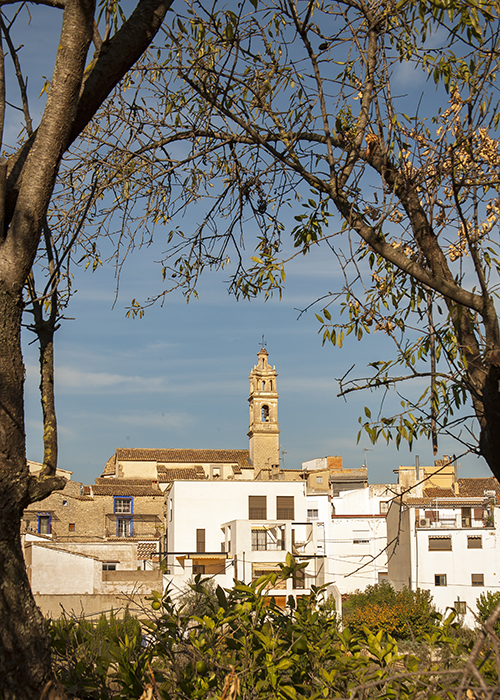 BENISSIVÀ also appears with the variants Beniçiba, Beniciba, Beniciva, Benicida and Beniceba. It is mentioned for the first time in a text written in the year 1310 and is also documented in the 1391 census. From the Arabic /Bani Sabbàh/, a family name.

It is located at an altitude of 320 metres above sea level, on the right bank of the Gallinera River, at the foot of the Penya Foradada. It has 72 inhabitants, according to the 2019 census.

Benissivà sits on a stretch of higher land that advances towards the Gallinera ravine between two smaller ravines, to the west and east, while to the south it ends with a stepped slope of terraces with olive and almond trees. From the current main road that winds through the valley it is perceived as a linear town, with a single perpendicular street which ends at the church, a typical design of the enlightened rationalism of the 18th century. It was planned out according to the wishes of Bernat Josep Puig, a descendant of the former wardens of La Vall de Gallinera and a resident of Benitaia.

Benissivà was the centre of the Gallinera parish, the parish of Moors that included the valleys of Alcalà, Ebo and Gallinera, under the invocation of Saint John the Baptist. After the expulsion of the Moors it remained uninhabited until the end of the 17th century, and only the church and the Casa Abadia were preserved. Shortly after the repopulation which took place at the end of the 17th century, the construction of the new church began.

The church of Benissivà, dedicated to Saint Michael the Archangel, is composed of a nave covered with a barrel vault that rests upon buttresses, from between which the chapels emerge. It has a transept marked high up, with the Gospel side covered by a dome set upon pendentives, while the high altar and the Epistle side of the transept are covered by a barrel vault. It has a communion chapel with an axis parallel to the nave of the church, located on the Epistle side, that is accessed through the high altar or the transept. It has a rectangular ground plan and a small chevette, covered by a dome over an illuminated tholobate and pendentives in the part near the transept and a long barrel vault elongated towards the chevette. We know that the construction of this church was carried out under the guidance of the master builder Nicolás Moragues, and that it was built between 1727 and 1744, while Juan Roque Cortell was the rector.